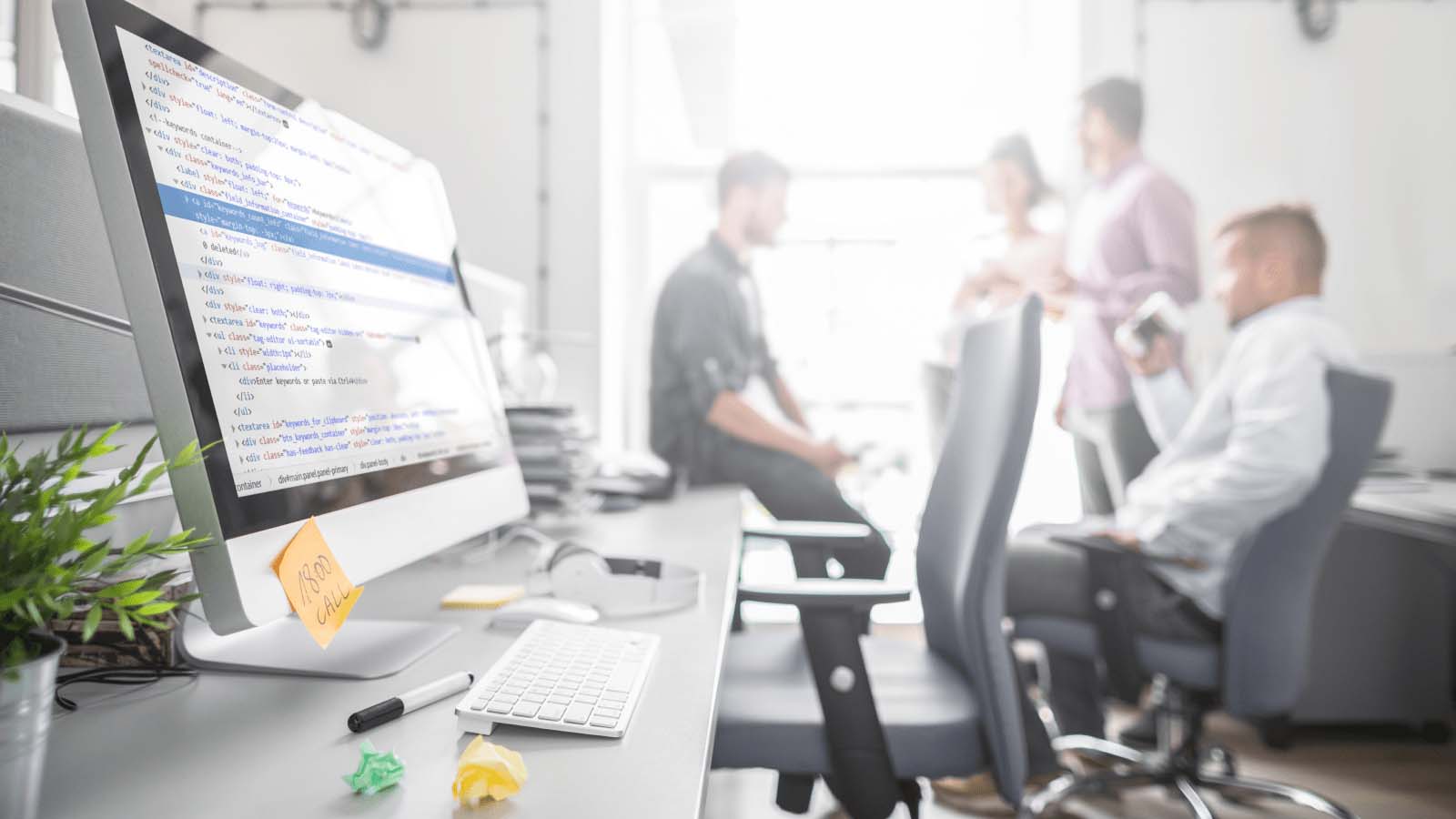 In essence, Behaviour Driven Development (BDD) improves communication between the project stakeholders to avoid missing requirements, having more bugs, delaying timelines, and failing the product. Much has been written around BDD methodology, but in this blog, I’m going to share how it makes life easier for each stakeholder.

How BDD makes the job easier for Product Owners: 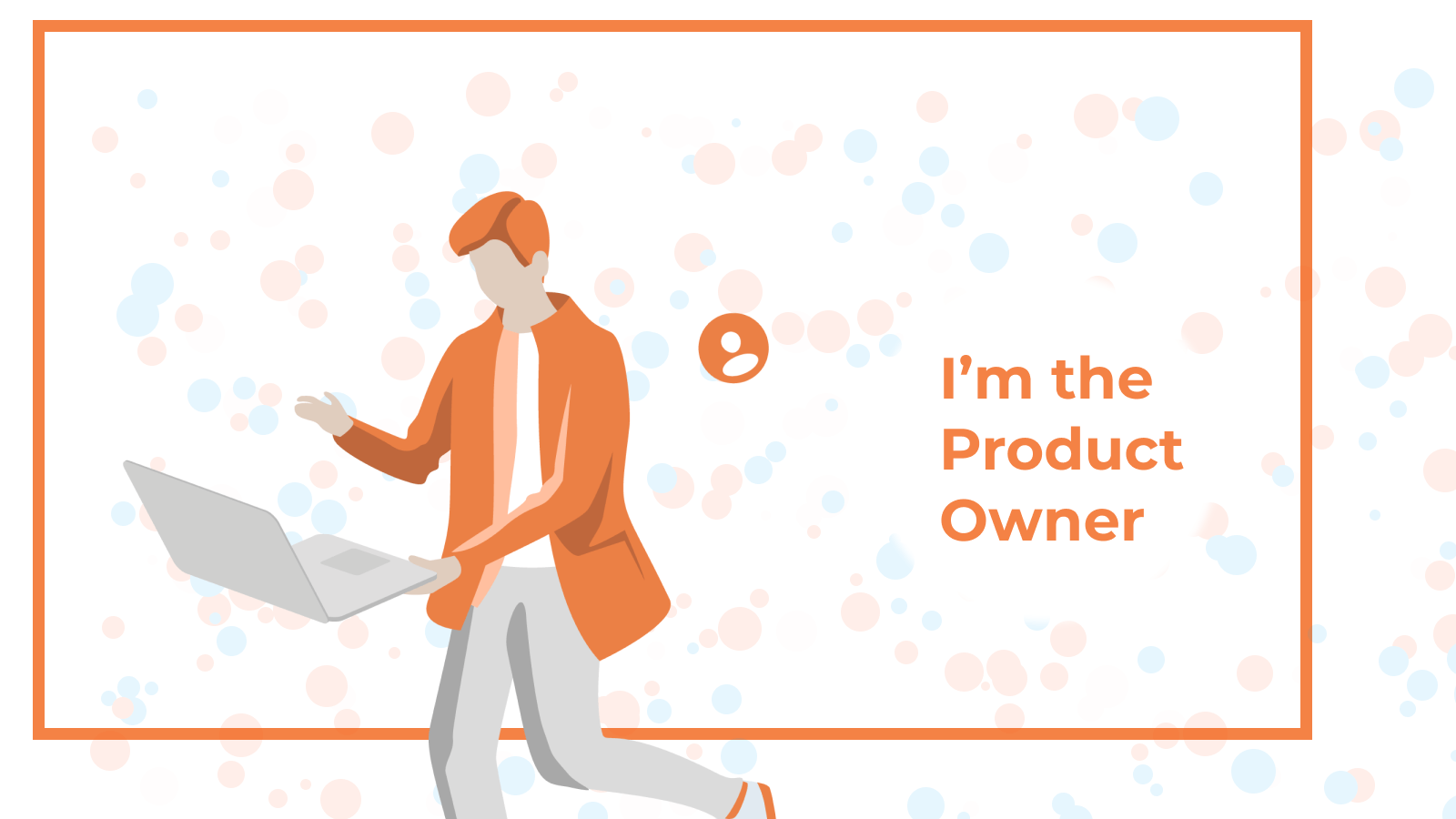 As a Product Owner, you’ll be responsible for the overall success of the product, and you would want to think in every possible way a user would think to make sure all edge cases are covered. BDD will help you in merely writing out those edge cases or any potential cases in the form of scenarios in plain English text. This feature of BDD will help in higher collaboration from the team towards the product as every member of the team would have a better understanding of the product. Also, product owners are the ones who have proper clarity on exact needs. They can have multiple scenarios listed to make sure everyone in the team does not deviate from the original requirements path.

Moreover, BDD feature files will act as executable documentation of the product, which will have an automation set up between feature files and test scenarios. Therefore, any minor or significant change request in a feature has to go through test scenarios that would fail unless a code is changed. This automation will help to maintain a sync up between requirements and development.

How BDD increases the efficiency of Designers:

As a Designer, you want to build the best mock-ups for any organization you work in. BDD will help by providing a user-centered design approach where every single bit of deliverable functionality focuses on the intentions and patterns of the user. Collaboration with the team and getting to know each possible variation would help you to have UX designs ready, considering all aspects of the user journey. Moreover, having such clarity at the beginning of the project can help you evolve your design thinking to new levels. Designers and developers must consider the needs of the user; it is one of the most critical concepts in BDD and is the key to user-centered design. By analyzing the behaviours of users that will use the system, we continuously explore various options to choose an alternative that would best meet the needs. In doing so, the process of design thinking and implementation will continue to evolve and get better at every stage of the software development cycle.

How BDD is a game-changer for Developers: 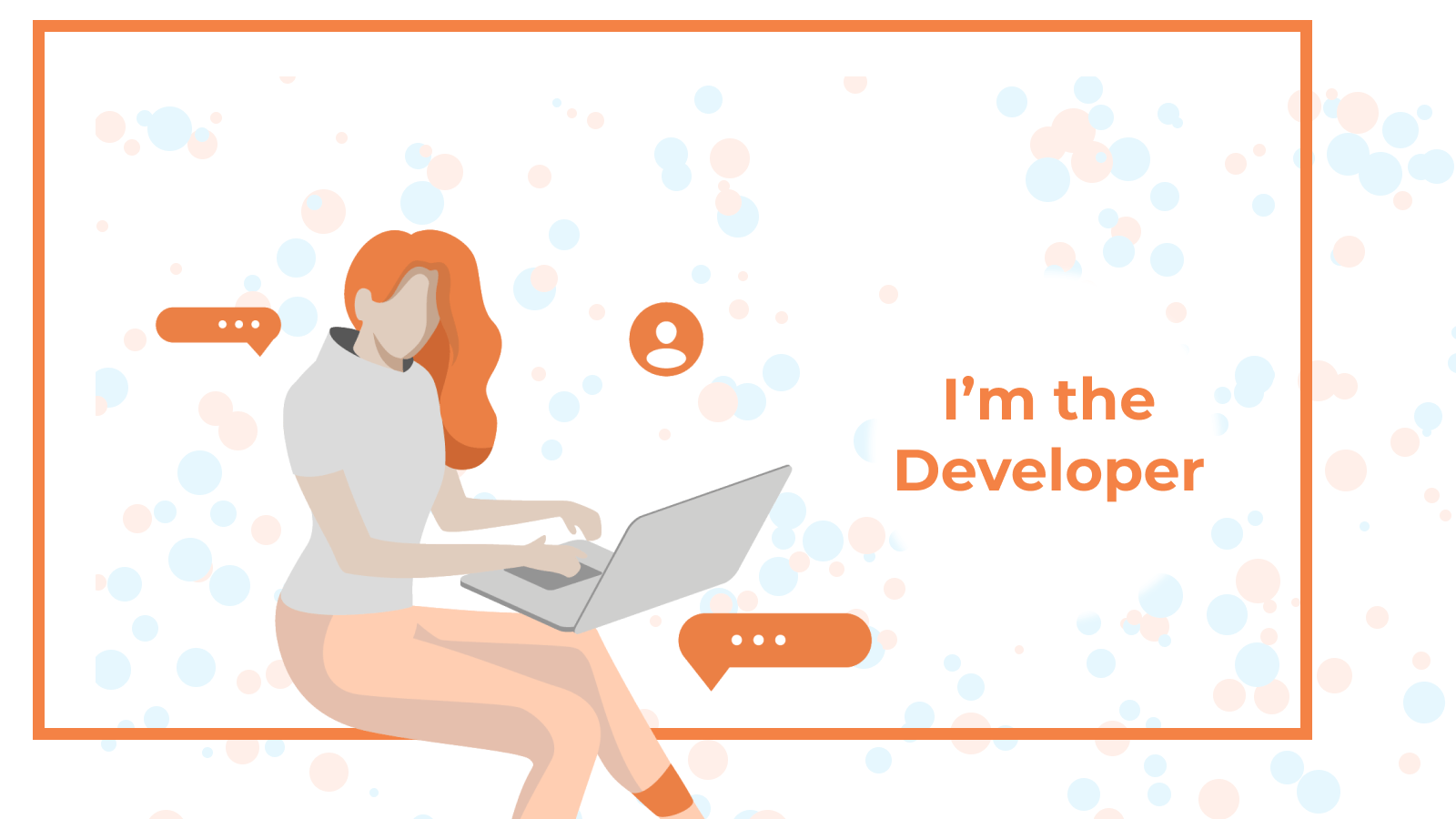 As a Developer, you want to have a clear set of requirements so you can confidently build what business has asked. You don’t want to go out to business professionals now and then to get clarity on needs when you have it already covered in multiple scenarios under feature files and that too in Plain English. It cannot get any better than this! There are tools available for testing, which are just a wrapper over the existing testing libraries (namely jest-cucumber for Javascript).  So adopting the BDD approach won’t let you stay limited only to feature files but also leverage testing and that too, making sure each part of the requirement has a corresponding test case against it. Features written in plain language can be easily automated.

To start with, feed an example to an automation tool (such as Cucumber or Spec Flow), which will result in the automated specification. Developers can use the result to do the application development. Moreover, BDD involves collaborating with stakeholders and other members of the team, which will help you gain confidence in the product you are going to build.

How BDD decreases the gap between Testers and other Stakeholders: 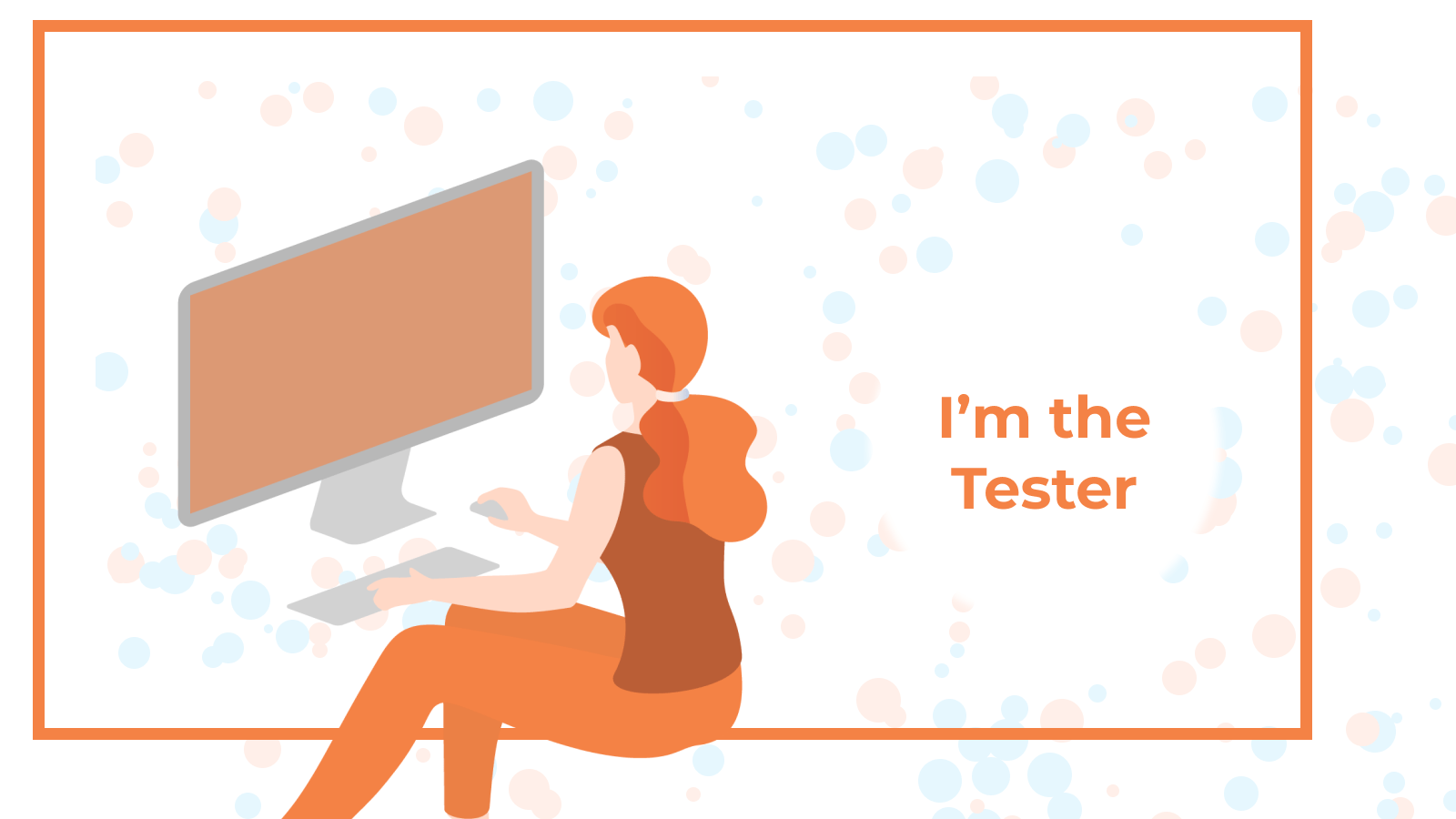 As a Tester, you want to successfully run acceptance testing and make sure software works as intended by the business. Another advantage of BDD is it favours system testability. The original concept behind BDD is driving the product based on behaviour, which makes it vital to have a check that things don’t go south. Unlike TDD, BDD focuses more on testing products as a whole instead of testing small parts of the code. Making sure a person gets from point A to point B is what BDD is concerned about, giving little or no importance to the path taken. Tools like Gherkin offer flexibility to implement a connection layer between the test specification and system, which is a part of automated test steps. Also, during the collaborative phase, Testers can pair with developers and designers to have a better understanding of features to be tested.

A practical BDD use case: 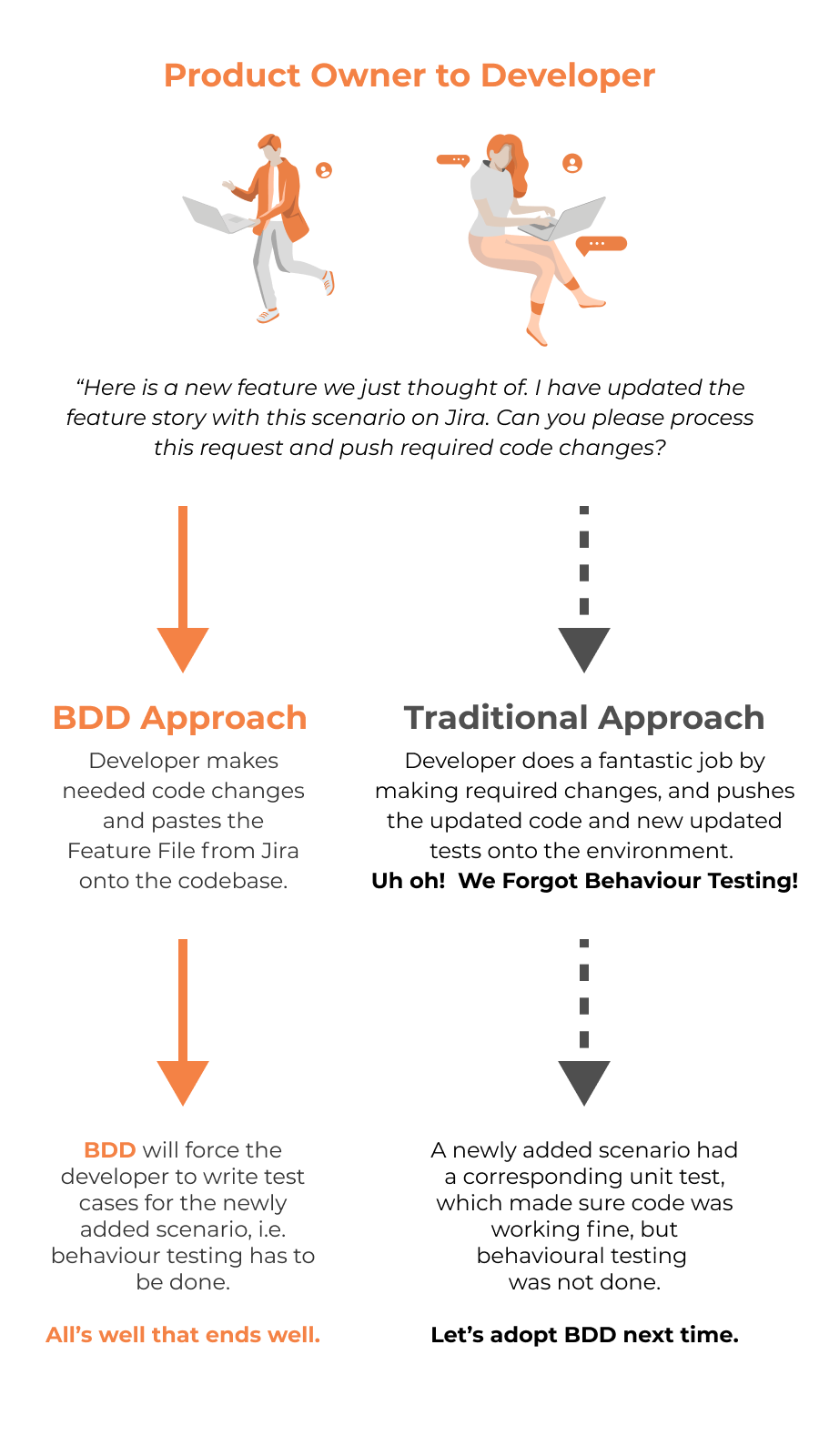 product owner to developer. “Here is a new feature we just thought of. I have updated the feature story with this scenario on Jira. Can you please process this request and push required code changes?

Developer makes needed code changes and pastes the Feature File from Jira onto the codebase. BDD will force the developer to write test cases for the newly added scenario, i.e. behaviour testing has to be done. All’s well that ends well.

Developer does a fantastic job by making required changes, and pushes the updated code and new updated tests onto the environment. Uh Oh! We Forgot Behaviour Testing!. A newly added scenario had a corresponding unit test, which made sure code was working fine, but behavioural testing was not done. Let’s adopt BDD next time.

The above diagram showcases benefits BDD can provide as compared to the Traditional Software development approach in terms of scalability and maintainability. Making sure newly added scenarios don’t disrupt behavioural implementation is what smooths the process for releasing change requests and is well covered by adopting BDD. An extra step towards writing multiple scripts and any possible cases using BDD will pay off soon by making it easy for the product to manage and scale. Also, a proper implementation of BDD will secure behavioural testing of the product, which is most likely to result in other approaches becoming available. 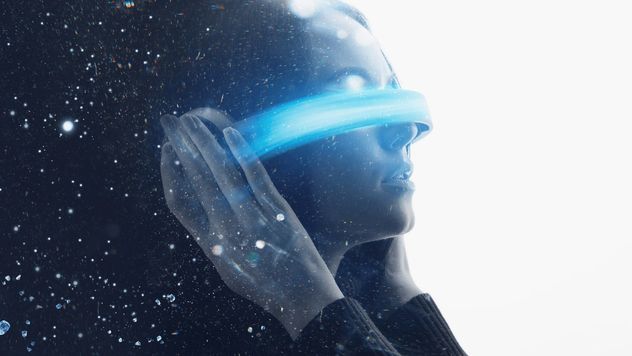 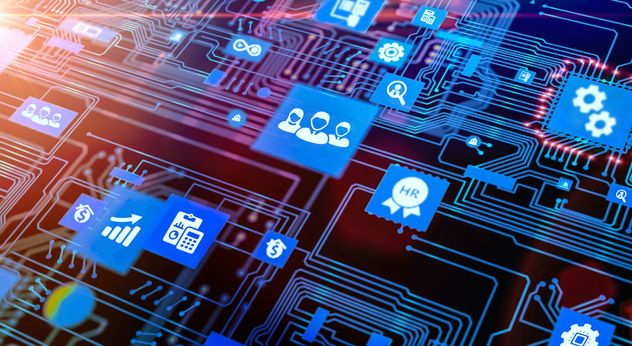 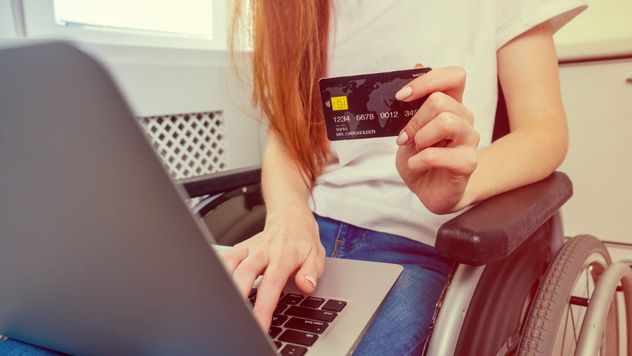 The Impact of Web Accessibility and ADA Compliance on eCommerce 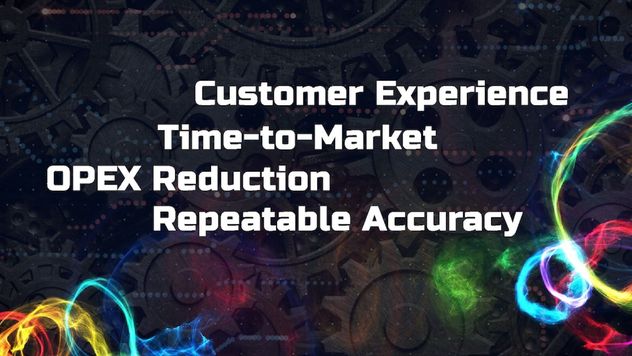